Back in february, we published an interview of a young french redditor, MiteNite. She accepted to explain to us what drove her to post naked picture of herself on the Internet. MiteNite might be the only successful french girl on Gone Wild, alone amongst thousands of american contributors. This can be explained by Reddit’s huge popularity in the US (which is far more important than in France) but is this the only reason ? Is it possible that mentalities in the US are that different from ours ? Just to make sure, we decided to interview a few GoneWilders, to learn more about those naked strangers. Can you introduce yourself briefly ?

I’m currently a college student at a university in the US. My major is nutritional sciences. I’m thinking about joining the peace corps. Also planning on attending grad school eventually. Not too sure what I’m doing with my life but just taking it one day at a time.

How did you find out about Gone Wild  ? How did you start posting ?
My ex boyfriend made the account for me and got me started/interested. I’ve always wanted to be a model and this is just sort of an easy way to see what others think of me. It’s an artistic outlet mostly. With the occasional more personal photos in « safer » subreddits, to display a bit more of personality. I’ve made quite a number of friends through Reddit.

Do you watch other posts from other redditors on GW? Or do you only post and follow the comments on your posts ?

Yes. I like to see what others are posting. There are some incredibly beautiful people on Reddit. It’s nice to share something so personal with a bunch of non judgemental strangers. Aren’t you scared about being recognised ?

I’ve been recognized but it hasn’t bothered me. I have nothing to be ashamed of. It’s a hobby for me and I have plenty of supporters who have my back.

I saw that you sometimes posted with your boyfriend, what was in it for him ? Did he liked the idea of you being watched ?

My ex loved the fact that he could show everyone what he has yet have me all to himself. He likes to think he created a mini Internet sensation. How would you describe your sex life ? Is it fueled by Gone Wild ?

I have an incredible sex life. I’m sort of starting over because my boyfriend recently broke up with me. But I’ve always had a great sex life – before and after gone wild. It doesn’t fuel it. It was just a way to share out sex life with strangers who may be interested.

I would get rid of the plots, haha. I’m there to watch sex, not some terrible actors and actresses trying to act. 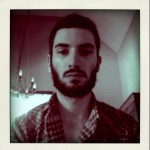