For quite some time now, we have been following Dante Dionys, an outstanding German performer who has successfully built up a presence on the European independent scene. For the first time, they agreed to answer our questions.

Hi Dante! Would you please introduce yourself first?

Since when have you been making your own videos?

I started making my own videos around fall 2018 which felt like a natural and logical thing to do. One reason is that it gives me more freedom and space for experimentation. But also it is fun to film a scene with a befriended performer or spontaneously take the camera out when you are alone and horny. I quickly realised that my fans were literally waiting for such content and these private intimate moments are what they want to see on my Only Fans. If you yourself are an adult performer I highly recommend getting on it and start to create your own content.

Who has been an influence for you in this industry?

My work and accomplishments are heavily based on the people who uplifted me. Paulita Pappel casted me for my first videos and remains a supportive friend and milestone in the industry. Stoya showed me that a lot of sexual tension is radiating through your facial expressions and is transported via eye contact. Bishop Black and Wolf Hudson as well as Lance Hart are inspiring in their work as bisexual male performers. Vex Ashley from Four Chambers and Lina Bembe have been very influential in their sharp-minded outspokenness and their artistic work, as well as Maria Riot who is a great sex worker activist, besides being an amazing and smart performer. They are just a few examples and there are many more who have been inspirations to me.

That is a very good question and I can’t explain myself how that could happen. I am planning to have more BDSM-scenes in my clip sale in the future but also am happy to work with studios on solving this issue. A problem with that is that there is a lot of BDSM-practices that are not allowed on all platforms: for example I would love to shoot a kidnapping and interrogation scene but that unfortunately falls under prohibited content. But yes, expect some more BDSM-scenes from me in the future.

I am open to a lot of things actually. I would like to shoot more own videos with other performers and am also always open to be contacted about that. Casual sex tapes as well as BDSM-scenes are on my list. I would like to work with people in so-called ‘mainstream porn’ just because I am curious about it and have so far mainly worked with people in the ‘feminist alt-porn’ world. Also some real radical queer stuff would be great! Since I enjoy story and dialogue as well I am also up for short of feature movies with more plot. But anything goes really, once the pandemic is over I actually really just want to start performing again, meet some new people, work with old friends and see where it takes me.

Do you see yourself becoming a director? What type of content could you shoot? 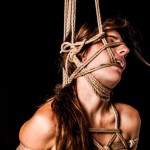