Metro Zu is one of the rap group representative of that new era coming from Miami, that all sweaty, booty, spiritual and vibing sex music. Recently, they travelled across our very own Europe on a journey in search of spiritual elevation, purple euro bills, soft pink matter and Mew. What came out as result of our encounter with those benefactors of experimental jizzed music made in Miami is nothing short than gluey.

What are all those names?
L: It’s the cliques.
C: Miami got cliques, you feel me? We are all ganged up out there.
L: This is just my shit, you know it, you don’t. As long as you know Lofty305, that’s me.

Where are the other members of the Metro Zu, Poshtronaut and Ruben Slikk?
L: They are in Miami right now. They’re chilling.

The whole Metro Zu movement, is a lot of music but it’s also a visual experience. You’re always drawing and painting stuff: drawing on walls, painting lambos.
C: We painted one lambo, the other one was for shows, a golden lambo. The real lambo that we painted on it wasn’t directly onto the car, it had some mad protection because they knew we would have fucked it up. Already prior.
L: We fucked it up in a good way though. It was beautiful. You know they weren’t even mad at the art, more about what happened around. The real story behind « Lambo God » is that we did the event, our homies came out, some girls came out, you know, some cybergodesses, all types of beautiful women. Cool ass girls were there, but you know, they were thinking like « oh shit this is way too ratchet » you know? Cuz the girls were in lingerie, looking sexy. My homies over there were throwing sets, smoking hell lot of weed.

Did you fell in love with every girl you pleasured?
C: It’s cool to fuck different girls and have really good feelings for each.
L: But not like that, I don’t fall in love, I just acknowledge that there is a large pool of love that I can dive in. If I wasn’t so focused on my shit. You know? Cuz, I’m on my shit right now, I’m on my grind.

I feel like there’s a lack of physical releases from your Miami crew. Except for SpaceGhostPurrp who got signed on 4AD.
L: You think so? It’s rare. You know what I mean? We make physical shit. « Strictly For My Raiders » (Denzel Curry’s latest mixtape) has like physical copies. You know? Maybe you can’t get it but it exists, it’s rare. You gotta hit up like Curry and shit like « Yo I want a physical copy ». And he’ll make one. We’re underground kangz. We’re like totally accessible, everybody in the game in Miami knows how we are. We’re totally accessible to our fans. We’re accessible to all the artists that want to work. All we ask for our time, because we’re hard working niggaz, is just give us some GWAP, you know?

Do you keep count?
L: Hell yeah! It’s easy to keep count, I haven’t fucked that many hoes. But the hoes, I fucked, not even hoes, just goddesses, I don’t fuck no hoes. I might have got some heads from some hoes, alright, my head count is very…you know, I got a head count, you feel me? I ain’t murdered nobody, but I got a head count. But this nigga *pointing to Chris* vag count is VERY HIGH.
C: I fucked some very beautiful women in my life. You travelled a lot across Europe and America, where are the most beautiful women?
C: Miami.
L: Madrid goes hard.
C: Yeah, I like Madrid. I met a sexy ass girl from Colombia there.
L: There’s probably some small ass town girls with great pussies but I’ve only been to big cities. But g-shit, the girls I fucked are “wow”. If you heard my music, after I fuck, it’s like « intimacy ». You know? All that RnB ass shit that I started making? It’s all based on the vag, inspired by it. It just gave my all aesthetics a whole crazy lift.

You did a song called Death Cumz? What’s the story behind it?
L: Everybody heard the story behind that song. Well, I mean, those who know what’s going down. Like Cyberculture mob, you know? The people that know what the fuck goes down. Yeah, that song is about a girl that I met and fell in love with. It kind of explains itself, I was in love. I’m not on that vibe anymore though. I’m on that MONEY GANG vibe right now (ha ha). All my music is about getting money now. Sometimes about girls though. There are girls in Paris that I really want to fuck, don’t get me wrong.
C: You guys know Orties? We want to fuck with them.
L: That’s some badass bitches. That song they did is so fucking crazy.
C: And they are actually really fucking artsy.
L: I don’t understand shit that they say but their voices are deep. They are bad bitches.

So you draw human bodies with animal parts, can you tell us more about that? Kind of like ancient Egypt inspired drawing.
C: It’s not animal. The thing is that I don’t believe that art, like bodies and shit are really this. Do you get me? I believe that this shit is just a gundam, it’s always gonna change every life that you live, so I feel like that sometimes you might have parts in you from different gundam that you might have already been in. So you’re big into the future, cyberpunk and space, have you seen the movie called Demolition Man?
L: Na.
C: Yeah with Sylvester Stallone and Wesley Snipes! It was so funny, I used to watch this on VHS when I was little, forgot the story though.

Well there is a specific part, it’s in the future, like 2050 or something and they don’t make love like they used to, it’s not physical anymore, it’s only through the power of mind, and I meant to ask you: how do you see sex coming in the future?
L: Oh, I have a book about that shit. It’s called « The metaphysics of love and sex ». I brought it with me, I didn’t finish it because it was too fucking weird. They just talk about fucking girls without touching them. But I’ve done such things before, have you ever been dry humped the fuck out of a girl and you know just start tripping out and going on a different galaxy with her? So I guess that Demolition Man movie is on point, I should watch that movie.
C: It’s on point, kind of, but I still see the physical tho.
L: That’s all like Deathcumz, you know, that girl I wrote a song about? She put me on that whole vibe where sex CAN be mental. Before that it was just fucking hot girls. We only fucked the last night I was in New York but I felt like we already had sex before, mentally.
C: Sometimes it’s the best. Just that whole build up.
L: The girls that I had non-physical sex with, they hit me up like I put it down. Trippy. It’s actually more of a swag impact on the girl though.

Are you big into magic?
L: Yeah, man.
C: I think our art is magic.
L: Art is magic! Back in the day, I was big on symbols. I love lines. That’s the beginning of art to me. To me it was like symbols that people would make to summon the power of the gods. My first art was mad magic mob. I’m sure, that magicians back in the days would just draw mad shit. It’s like putting all your thought for a certain purpose, into this piece. This is like that art, it’s like a spell to get bitches.

So what is your favorite symbol?
L: I like the vag. I feel like we’ve been going through a new phase in time, before it was mad wars and it’s coming to the end of that shit. Because you know what it is? Girls are just like fuck war and shit, I don’t want niggaz to fight. They just want a nigga to fuck’em and shit.
C: All I learned from woman is that all they want is to fuck.
L: But when I mean fuck, I mean really connected fuck. Like fuck good as fuck. Niggaz are too busy competing and shit, and they are loosing the whole point: put your dick in a vag. It’s the point of life. You feel me? Because when I’m doing that, I feel like I’m doing the coolest shit I could be doing. Anytime. When I’m in there, it’s just like « alright, my purpose in life is fulfilled ». That’s what we should be doing, not all those wars.

All of the younger rappers seem to be into lots of video games, animes and stuff. How did you guys came to bringing that culture into music and art altogether?
L: Niggaz were always rapping about video games and just random shit that they liked. Like cartoons and TV shows.
C: Kind of like Del The Funky Homosapien. Deltron.
L: 90’s niggaz grew up on some certain shit we are all gonna rap about : Dragon Ball Z, Gundams and Pokemons. Pokemon is the shit. It’s just culture. The culture changes so the shit we rap about is going to change. I remember when niggaz started to talk about « yo sega genesis, super nintendo », you feel me? Yeah, that nigga, he was playing video games too. Speaking of Super Nintendo, I wooped the fucked out of Donkey Kong’s ass.

Chris, the other day you posted a beat tape that costs $500, what was the idea behind this move?
C: Yeah and so many people got mad because of this. I made all of my music undownloadable, I don’t know why, maybe because I was bored. I don’t want people to buy them, I just want people to vibe to it, feel that shit. Who’s gonna pay $500 for a beat tape anyway, twelve tracks, it would be ridiculous. I’m just trying to give the idea to the people that they can be rich. I called the album Rich Gang for a reason, you feel me? I’m trying to be on that rich wave right now. I am rich already, mentally and spiritually. And now I just get a bunch of people mad at me without even saying fuck you to anyone.

L : Yo this is kind of cool actually, it’s like Tokyo Gore Police.
C : Yeah it is artistic, way more than pornographic. I already knew about Genki-Genki, I was already jacking off to this shit, y’all are late as fuck on this shit (rires). I jack off to this shit yesterday! As a matter of fact, we should stop this interview because I jacked off.
L : Two thumbs up! I like the whole idea, but only if the animals are down. If animals are not down, then I don’t know what the fuck you guys are doing with this shit (rires). 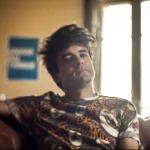