Who’s to thank for it? meundies.com. The brand had the guts to praise the virtues of its socks on a brand new Canadian site (hardly 2 month old), whose URL isn’t really explicit: paintbottle.com. The novelty of the site might be for something in MeUndies’ choice (even if the purpose of the site is quite obvious) or were they motivated by the presence of business angels investing in a site that promised to bet on quality rather than on quantity: 7 minutes (at least) videos, no content submitted by the users…

By emphasizing the distinctive positioning of the site on difference and quality, Paintbottle pulled it off : everyone in the business is speaking well about them.
MeUndies (and the others), why wouldn’t you come at Le Tag Parfait? 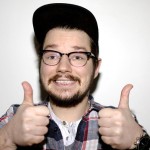 One-eyed, Polish born, intern. Who can fap to this?